On Saturday, August 3rd, the Missouri History Museum will open a new, two-part exhibit that blends national, international and local history. Pulitzer Prize Photographs, a traveling exhibit from the closing Newseum in Washington D.C features the Pulitzer Prize winning photographs from the last several decades presented in context and displayed alongside In Focus: St. Louis Post-Dispatch Photographs, which allows the museum to also tell the local side.

The national nature of this exhibit is particularly unique for the Missouri History Museum since they began focusing on telling St. Louis and Missorui’s story more deeply in 2014 by generally soley curating and developing their own exhibits. Madeline Reichmuth, the museum’s public information officer says this allows them to showcase more of the many photos and artifacts in their collection.

This, though was one exhibit, Jody Sowell, a former journalist and current director of exhibitions and research for the Missouri History Museum and Reichmuth say the museum would have wanted to display even without the local addition.

“The exhibit includes images that St. Louisans were talking about regardless of where they were taken. St. Lousians were talking about Kent State, and the shooting of Lee Harvey Oswald by Jack Ruby or the assination of Martin Luther King. So even though these photos were taken in Boston, or Syria, or Sudan doesn’t mean they didn’t have a local impact,” said Sowell.

The earliest of the Pulitzer Prize photos was one taken in 1942 by St. Louis native Milton Brooks of the Autoworkers Strike in Detroit, and the exhibit continues until we reach the 2015 winners which include the St. Louis Post-Dispatch and staff photographer Robert Cohen’s photos of the 2014 Ferguson Protests. 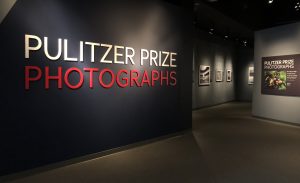 There is one other St. Louis connection to the national exhibit – the Post’s first Pulitzer Prize for photography in 1989 of a fire rescue. Though the girl in the exhibit did not survive, the photographer has gotten numerous letters from people who put in smoke detectors because of this photo that later saved their life.

The photos aren’t just arranged chronologically, but the placement is deliberate – sometimes arranging the best of humanity next to the worst of our race. Other times, the curators put a moment of joy front and center as a bit of relief from the pain of many of their photos, other times putting a controversial photo front and center to hopefully spark discussion among their visitors.

“This iteration of the Pulitzer exhibit has been at two other institutions and will go on to many more. I don’t think you will see it ever look as good as it does at the Missouri History Museum and that is largely because of the addition of the Post-Dispatch section,” said Sowell.

In Focus: St. Louis Post-Dispatch Photographs which resides in the center of the Pulitzer Prize exhibit features about 75 photos from throughout the Post-Dispatch’s tenure reporting on our city from moments everyone will remember – like the Stanley Cup win earlier this year, to history largely forgotten such a glider crash that killed several city leaders in 1943. 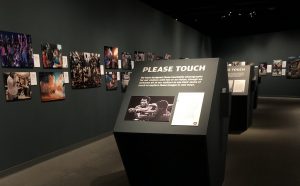 Sowell, who curated the exhibit, worked with the Post-Dispatch to determine the types of photos they wanted to include. From there, they paper sent over a large batch of photos and the museum staff narrowed them down to those shown – which they were able to divide into three themes. Protest, Moments, and Sports.

In the protest section, because of the Pulizer focus of the wider exhibit, the Museum decided to showcase the entire collection of the group of 19 Furguson protest photos that won, along side earlier protests like the 1942 demonstration at Carter Carburetor.

The moments section is a mix of big moments in such as Prohibition and smaller every day moments and the sports section features pictures from the 1944 World Series where the St. Louis Browns and St. Louis Cardinals faced off to more recent wins and losses in Cardinals, Blues, Rams and basketball history.

Originally, the exhibit was only set to feature one photo of the Blues for which the last sentence read that the “St. Louis Blues are the oldest franchise to never have won a Stanley Cup”. That plaque quickly changed in June and they fit in the photos of the win.

If you’d like to learn more about the history in the photos and work as a photojournalist the museum and the Post-Dispatch are hosting several events. One of which is at 2:00 p.m. on August 3rd at the museum. A panel of St. Louis Post-Dispatch photographers will talk about the art of photojournalism and the process of capturing, selecting, and editing an image that tells a newsworthy story.

Pulitzer Prize Photographs and In Focus:

Photographs are open Aug. 3, 2019, through Jan. 20, 2020 at the Missouri History Museum. Admission is free. Please note some material in these exhibits may be too intense for young children.

Weeks following the death of Michael Brown and the ensuing upheaval in Ferguson, eight African American mothers took the stage at the Missouri History Museum to have a conversation with an audience of white mothers about “the talk” they have with their sons about driving, walking, and living while Black in America. Five years later, much has changed and much has stayed the same. Where are we now and where do we go from here?

Join filmmaker Oren Rudavsky for this acclaimed film that explores the life of American icon Joseph Pulitzer, a reporter and publisher who, among other things, founded the St. Louis Post-Dispatch. Q&A will follow.